Holy Ghost Troop vs. the Synagogue of Satan

I dedicate this analysis to Christina Green, who was born on 9/11/01 and killed at the age of 9 years, 119 days. Requiescas in pace Domini, puella casta caraque.

Captain May, an excellent article! The only thing that you left out was that the 9/11/2001 attacks were 11 years after Pres. GHW Bush’s New World Order speech of 9/11/1990. The first paragraph of your Occult IKE article of Sept. 2008 mentions that speech:

“There has always been a bizarre synchronicity in the 9/11 affair. You may think that I mean to comment on the coincidence that our national emergency condition was begun with an attack some seven years ago on 9/11 — the very national date code that already said “Emergency!” to the American people. But I was thinking more about the coincidence that 9/11/01 followed the strange announcement of 9/11/90 by the first President Bush that the first Middle Eastern War would create a ‘New World Order.’ The attack of 9/11/01 came 11 years later to the day.”

Cryptanalysis of 9/11 and Code Variants

You are right, JS. The occult numerology surrounding 9/11 is unmistakable and mind-bending; and warrants an article.

Holocaust Museums, though built to elicit sympathy, are really Satanic altars in the genocidal NWO plan against humanity. Holocaust chutzpah is infinite, as is shown by the Synagogue of Satan (SS) opening the Transylvania holocaust museum on 9/11/05, the 13th day after the geo-weapon Katrina mass-murdered New Orleans, a vampiric signal to be sure. It was also supposed to be a celebration of the July 28, 2005 nuking of the BP refinery in Texas City, but Ghost Troop broke it up by ordering a coup d’etat. Between 7/28 and 9/11 there was a span of 44 days.

In what national commentators were calling the most important race in the country, Nikki Haley won the Republican gubernatorial runoff. With 99% of votes counted, her vote count was 233,230. Her final vote count was 233,332.  These code-numbers were strong signals that the SS was in control.

I first became aware of the sinister number 322 after the Houston Chronicle asked me to write a terror target analysis of the city. The result was Don’t laugh at duct tape; it saves lives, and the Chronicle published it on 2/23/2003 (22323). My analysis was a good reading of what the Bush administration had planned for my hometown, and in typical SS mockery they telegraphed their insidious intention to the intended victims. The invasion of Iraq would begin less than a month later on another 322 variant, 3/20/2003 (3223). 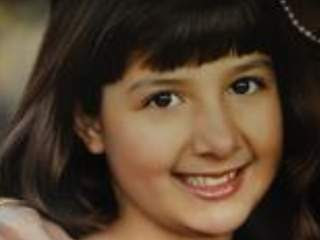 "And whosoever shall offend one of these little ones that believe in me, it is better for him that a millstone were hanged about his neck, and he were cast into the sea." (Mark 9:42)

Nikki was a carefully chosen Satanist starlet, and went on to become the 116th governor of South Carolina. Reverse the 116 to get 611, then rotate the 6 to get 911. She assumed office on 1/12/2011 (11/22/11), the same day Barack Obama boosted his approval ratings by his diabolical eulogy over Christina Green.

Killing Christina was Christ killing, just as installing Nikki was installing Old Nick. Take the N away from Nikki to get IKKI, letters that decode to 911119. Christina, born 9/11/01, was sacrificed at the age of 9 years, 119 days (9119).

On 6/22/2006 (62226) the FBI arrested a handful of young black men, the so-called Liberty City Seven, who had been coached to be patsies in an attempted May 3 dirty bomb attack on Sears Tower, another case in which Ghost Troop led a revolt by police and military officers to preempt a false flag.

I could go on with SS code-busting, JS, but this brief expression of 9/11 and its variants is plenty for one article. Since you have clearly done your homework on the Holy Horde, I’m confident that you’ll follow up on our references in this article. If there is to be a military or civilian overthrow of the New World Order, in which the Synagogue of Satan has enshrined itself, the Ghost Troop record will be all-important. It has more than enough evidence to warrant the arrest of thousands for the capital crime of treason under Article 3, Section 3 of the United States Constitution. At this point, nothing less will begin the hard work that must be done. " For we wrestle not against flesh and blood, but against principalities, against powers, against the rulers of the darkness of this world, against spiritual wickedness in high places." (Ephesians 6:12)