The prostitute who ended Tony Blair's chances for the EU Presidency 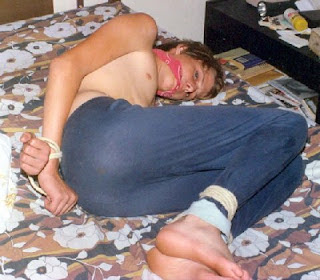 A picture of Johnny from a paedophile site, shortly after his kidnap.
The picture emerged only recently. (www.johnnygosch.com)
The Tap Blog received a number of bulletins from ex-spy Gordon Logan over the last year.  None of these were more memorable than his exposure of Tony Blair using a male prostitute at The White House, a prostitute named Jeff Guckert, George Bush's personal favourite, who he lent to Blair. Guckert bragged about it afterwards online, and the story spilled out.  (Search The Tap Blog)

It was Gordon Logan who ensured that the story spilled out further at higher levels.  It was around this time that Blair was riding high, supporting the Iraq war, and full of expectation of becoming the first President of Europe.  In the Murdoch media, the Presidency for Blair was already a done deal.

Then suddenly the deal was off.  Gordon Logan says it was when the Germans realised that Blair was borrowing male prostitutes from George Bush, they didn't feel too happy allowing him to be the first President of the European Union.  Blair was in effect blocked, thanks to Gordon Logan, as he relates.

This video describes the full horror of the experience of Johnny Gosch, Jeff Gannon, Jeff Guckert (his real name followed  by his pseudonyms), being kidnapped by paedophiles during his paper round at aged twelve, at Des Moisnes, from the viewpoint of his very brave mother, who somehow is able to speak publicly about her son's life.