[The relentless rise of drugging instead of curing.  How many are Drug induced diabetes?] 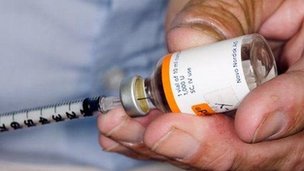 More patients are being diagnosed and treated - some with insulin

The number of prescriptions for treating diabetes in England has topped 40 million, figures show.

In England, 2.5m people have been diagnosed with diabetes and the number is expected to reach 4.2m by 2025.

Health officials are warning of the financial impact on the NHS.

This growth in diabetes drug prescription numbers is faster and greater than for prescriptions overall, where items have increased by 33%.

Barbara Young, chief executive of Diabetes UK, said it was a wake-up call to all concerned.

"We face the real possibility of diabetes bankrupting the NHS within a generation.

"This is why we need to grasp the nettle on preventing Type 2 diabetes, which accounts for around 90% of diabetes cases.

"We need a government-funded awareness-raising campaign on the risk factors and symptoms of Type 2 diabetes and we need to get much better at identifying people at high risk so they can be given the support they need to prevent the condition."

HSCIC chief executive Tim Straughan said: "Our figures show diabetes is having a growing impact on prescribing in a very obvious way - from the amount of prescriptions dispensed to patients in primary care to the annual drugs bill costs to the NHS.

"Other reports we produce, such as our National Diabetes Audit and the Quality and Outcomes Framework, also demonstrate the impact of diabetes is widespread in all areas of the health service, from pharmacy to hospital care.

"When all this information is considered together, it presents a full and somewhat concerning picture of the increasing impact of this condition."