“They (vaccine safety trials) all only use benign placebos – we use the safest most pure vaccines as a placebo."---David Salisbury (source  The Arnica Network)

[2017 Aug] New study: Vaccine Manufacturers and FDA Regulators Used Statistical Gimmicks to Hide Risks of HPV Vaccines  A new study published in Clinical Rheumatology exposes how vaccine manufacturers used phony placebos in clinical trials to conceal a wide range of devastating risks associated with HPV vaccines. Instead of using genuine inert placebos and comparing health impacts over a number of years, as is required for most new drug approvals, Merck and GlaxoSmithKline spiked their placebos with a neurotoxic aluminum adjuvant and cut observation periods to a matter of months....Of the 16 HPV vaccine randomized trials, only two used an inert saline placebo. Ten of the sixteen compared the HPV vaccine against a neurotoxic aluminum adjuvant, and four trials used an already-approved aluminum-containing vaccine as the comparison....
When it came time for Merck to report on the occurrence of more serious reactions, “Systemic Adverse Reactions” and “Systemic Autoimmune Disorders,” for example, the company scientists switched to a very different format. In these tables, the third column that reported results for the saline placebo recipients disappears. Instead, Merck combined the groups receiving the spiked aluminum placebo into a single column with the group receiving the genuine saline placebo (see example below). The merger of the two control groups makes it impossible to compare results for Gardasil versus the saline placebo or the aluminum placebo versus the saline placebo. In this way, Merck’s researchers obliterated any hope of creating a meaningful safety comparison....
Based on the numerical outcomes of that study, the Mexican researchers calculated the likelihood of being actually “helped or harmed by the 9-valent HPV vaccine.” Their “worrisome” finding is that the “number needed to harm” is just 140, whereas 1757 women would need to receive the vaccine for a single one of them to enjoy its projected benefits.

[2011 May] ANOTHER OUTRAGEOUS MEDICAL LIE  It's called "placebo washout."

[2011 Jan] Big Pharma Vilified Researcher for Threatening Vaccine Program By Russell L. Blaylock, M.D. Anyone analyzing the “vaccine safety studies” done by vaccine makers and vaccine proponents can see that they were purposely designed to show safety by omitting people in the study who truly reflected the population being vaccinated and who were, by all standards of science, at risk of harm by the vaccines.
They do studies that use as placebo controls people injected with a vaccine adjuvant. Placebos are supposed to be completely inert. The evidence shows that the greatest danger from vaccines is from the vaccine adjuvant — so, how can they use adjuvant-injected people as controls? Yet, all of their studies used such vaccinated controls — this is blatantly manipulated, and they know it.
The studies that are quoted endlessly by these elite members of academia and government agencies and used to close the door on the vaccine connection to neurodevelopmental problems are purposefully designed so as to suggest no link between vaccines and any complication.
This falsified research is protected by academia, the media, and government agencies. Yet, they have the audacity to stand in judgment of Wakefield. This is not to say that Wakefield should be free of scrutiny — all researchers should be carefully scrutinized for bias.

[2010 Nov] Inside the Mystery Placebos by William Campbell Douglass II, M.D. Just 8.2 percent of all pill studies and 26.7 percent of all injection studies disclosed the contents of the placebo.

[2010 Nov] Basis of Many Medical Studies Found to be Proved Fatally Flawed By Dr. Mercola  A new study analyzed numerous research trials to determine the content of the supposedly "inactive" placebos used for research, but discovered that placebo disclosure is rare. Researchers examined 176 medical journal studies and found that the vast majority didn't mention the contents of the placebos at all.

Gardasil clinical trials -- Placebo by Cynthia A. Janak   In this FDA document I want you to note that Study 018 is the only study where a saline placebo was used. All the other studies the placebo had 'amophous aluminum hydroxide sulfate.'

Marcella Piper-Terry shared: "You know how we've been told all those serious adverse reactions to Gardasil are "coincidence" and would have happened anyway?  B.S.   Merck used the aluminum adjuvant as the "control" in their clinical trials. There was no placebo. Of 7 clinical trials, only one used a placebo (saline solution) and the number of subjects was 594. In comparison, 15,706 subjects received Gardasil and 13, 023 subjects were injected with the aluminum adjuvant. They compared the number of serious adverse events between the Gardasil group ("experimental") and the adjuvant group ("control"). Not surprisingly, there was no significant difference between the number or severity of adverse events between the groups. That's because aluminum is a neuro-immune toxin and subjects who received the aluminum "control" were disabled, had seizures, developed autoimmune disorders and died at nearly identical rates to those who received the Gardasil vaccine.  The serious adverse events are being caused by the aluminum. They are not "coincidence" and they would not have occurred naturally.   Take home message: There is no safety data for Gardasil - and this is the status quo for vaccine manufacturers. Do you REALLY think they care about your health? Hint: the 3-shot series is nearly $400. Per person.   No wonder they want to vaccinate little boys and infants, too.    Just say NO."

Whether a drug makes it to market simply only means that someone has had enough money to put it through, and pay the right politicians. That's all. It doesn't mean it works or it doesn't work....... we're very familiar with the people who developed the double-blind, placebo-controlled study. And we know what they know about medicine and science, and they all admit that they don't know anything about it. ......The problem with the placebo controlled, doubled-blind study is that you are using two human beings as controls against one another. There is no more out-bred species on Earth than two human beings. A person from the North Pole can procreate with a person from the South Pole, and can have an infant. There is no animal on Earth that is as out-bred as human beings, including two identical twins, they are not the same. Because, as soon as the zygote divides there are different positions, there's different antigens to which they are exposed. The bottom line is that these double-blind, placebo-controlled studies are run by people who don't know much about science. [1993 Interview with Dr. Alan Levin.] Modern Medicine and its Military Links 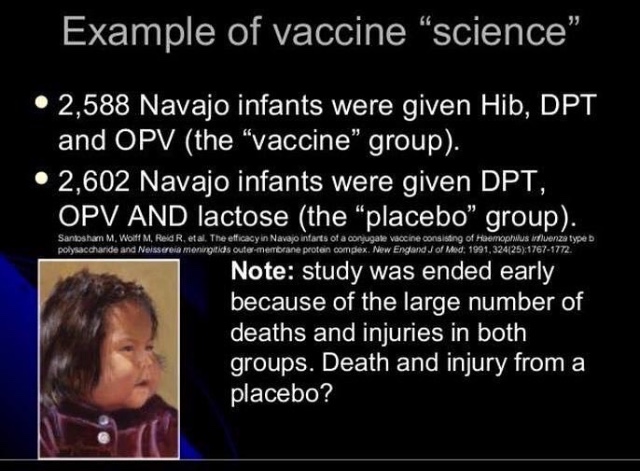 Vaccines are tested rigorously and proven safe....right? But what are they tested against?

Pentacel (5 in 1: Dtap, Polio, HIB) tested against already licensed and non-licensed combinations of those vaccines. Both test and control groups also received PCV, HepB (and MMR at the last dose) at the same time.
https://www.vaccineshoppe.com/image.cfm?doc_id=13799&image_type=product_pdf

Hiberix tested against previously licensed HIB vaccines and both groups given various combinations of pediarix, PCV, rotarix & HepB at the same time. https://www.gsksource.com/pharma/content/dam/GlaxoSmithKline/US/en/Prescribing_Information/Hiberix/pdf/HIBERIX.PDF

MenHibrix (Meningococcal & HIB) tested against a single licensed HIB vaccine. Both groups given various combinations of Pediarix, PCV, MMR or Varicella vaccines at the same time.https://gsksource.com/pharma/content/dam/GlaxoSmithKline/US/en/Prescribing_Information/Menhibrix/pdf/MENHIBRIX.PDF

PedVaxHib (Meningococcal & HIB) tested against another form of pedvaxhib or a placebo. All groups given DTP and OPV at the same time.http://www.merck.com/product/usa/pi_circulars/p/pedvax_hib/pedvax_pi.pdf

Engerix-B given to all test subjects and observed for reactions. No control group was observed or compared.
https://www.gsksource.com/pharma/content/dam/GlaxoSmithKline/US/en/Prescribing_Information/Engerix-B/pdf/ENGERIX-B.PDF

Recombivax given to all test subjects. Infants and adults simply observed for reactions. Children compared the 2 vs 3 dose schedule.
http://www.merck.com/product/usa/pi_circulars/r/recombivax_hb/recombivax_pi.pdf

Gardasil tested against aluminum adjuvant or a "saline placebo". However, the saline placebo is made up of: water, 9.56mg sodium chloride, 0.78mg L-histidine and 50micrograms polysorbate-80.
http://www.merck.com/product/usa/pi_circulars/g/gardasil/gardasil_pi.pdf

All flu vaccines observed for reactions, no control group, and/or against other flu vaccines.
http://www.immunize.org/fda/#flu

MMRII, adverse event observation of those who receive MMR.
http://www.merck.com/product/usa/pi_circulars/m/mmr_ii/mmr_ii_pi.pdf

Bexsero tested against either a meningococcal ACWY vaccine, Japanese encephalitis vaccine or an aluminum placebo.
https://gsksource.com/pharma/content/dam/GlaxoSmithKline/US/en/Prescribing_Information/Bexsero/pdf/BEXSERO.PDF

Trumenba tested against groups getting other vaccines and/or a "saline placebo". However, the saline placebo is made up of: water, 9.56mg sodium chloride, 0.78mg L-histidine and 50 micrograms polysorbate-80.
http://labeling.pfizer.com/ShowLabeling.aspx?id=1796#section-6.1

TD Generic- states "Data on adverse reactions following fluid and adsorbed preparations of MassBiologics’ Td with various doses of the diphtheria and tetanus components have been reported in a series of studies." and also that it can be used to complete the dtap series but safety and efficacy has not been evaluated. Does not list study results.
https://www.fda.gov/downloads/BiologicsBloodVaccines/Vaccines/ApprovedProducts/UCM164127.pdf

***Rotavirus and Pneumovax actually claim placebo studies but the contents of their placebo were undetermined.