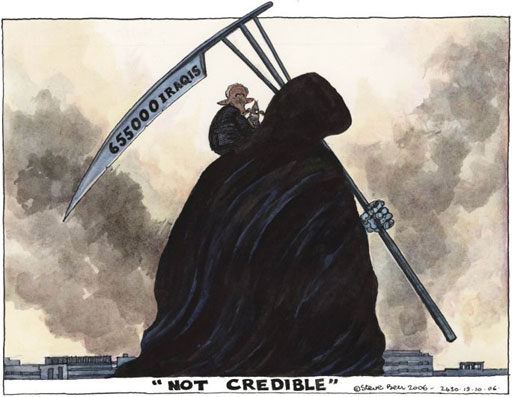 Dave Brown January 2003, The Independent: I based this cartoon on Goya's Saturn Devouring his Children, which was based on a prophesy in Greek myth that Saturn's children would grow up to supplant his power, so he decides to eat them. Instead of Saturn, I drew a naked Ariel Sharon holding a body with various forms of destruction in the background. The following day, the Israeli Embassy complained and sent the image round to Jewish groups in America. It elicited a huge response, not all of which was bad. http://www.cartoons.ac.uk/

Trotsky, Leon   Death's Head White Russian (pro-Czarist) poster depicting the Red Bolshevik, Leon Trotsky (Jewish name Lev Davidovich Bronstein). Trotsky is most often credited, with good reason, with coining the term “racist” as a derogatory term for his political enemies: White Gentiles. Note the Christian cross broken in the upper left and the White Russian being threatened by the Mongolians in the lower right — even then Marxist Jewish extremists jacked-up the other races to do their bidding. Some things never change!