[2009] President Obama: A 'Nod' from the craft and the altar of Zeus By Thomas R. Horn   In the Greek, the phrase "where Satan’s seat is" literally means, "where a throne to Satan is." Scholars identify this throne or ‘seat’ as the Great Altar of Zeus that existed in Pergamos at that time. So important was the worship of Zeus in ancient Pergamos that perpetual sacrifices were offered to him upon the towering and famous 40-foot high altar. Antipas, the first leader and martyr of the early Christian church is believed to have been slain on this altar, slowly roasting to death inside the statue of a bull, the symbol and companion of Zeus. The phrase in Revelation 2:13 "wherein Antipas was my faithful martyr, who was slain among you, where Satan dwelleth" is considered a citation of this event. Approximately two-thousand years after Revelation 2:13 was written, German archeologists removed the massive altar of Zeus from the ruins of Pergamos and took it to Berlin, where it was restored as the centerpiece of the Pergamon Museum. It is here that Hitler first adored it, later building an outdoor replica of it from which he gave a series of speeches that mesmerized many Germans.
....Obama’s stage was a dead ringer for the Great Altar of Zeus [6] that Obama’s campaign managers tried to explain away the design as being a conglomeration representing the portico of the White House with the U.S. capital building. "But experts agreed with Richardson," Gallo wrote, "it was a replica of the Great Altar of Pergamum

Replica of Pergamon Altar in the Denver Broncos' Mile High Football Stadium at the DNC2008, with the pulpit up front in the middle, and Obama's image projected on both sides of the Altar. http://www.ortzion.org/news59-Obama-special_Addition.html

America's and the world's new idol, speaking in front of a smaller replica of the Pergamon Altar of Zeus, Turkey http://www.ortzion.org/news59-Obama-special_Addition.html 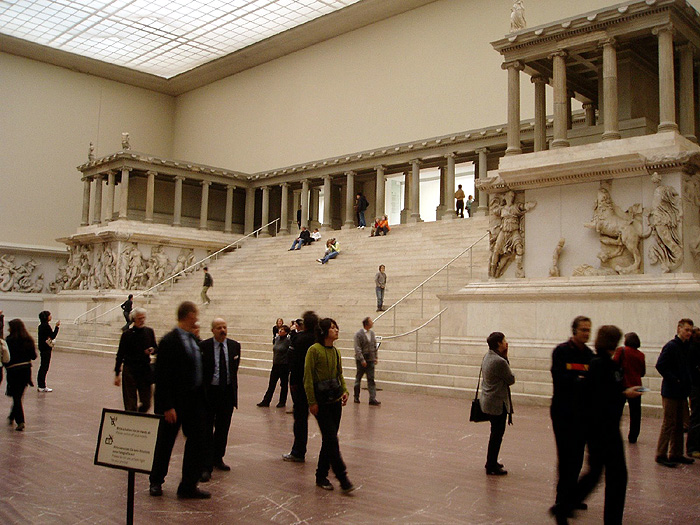 Pergamon Museum in Berlin, put together by Middle East history academicians in the early 20th century.