Conspiracy theories are corroding our society

Not all conspiracies are false, but their recent proliferation is a problem that affects us all 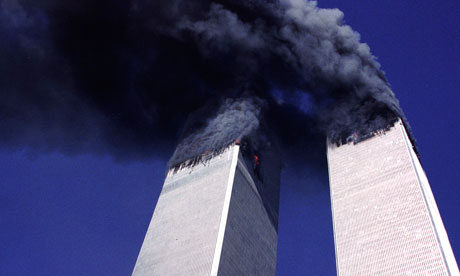 Conspiracy theories continue to surround the attack on the World Trade Centre. Photograph: Richard Cohen/Corbis
It has been quite a week for conspiracy theories. First, the case of Dr David Kelly was revisited, accompanied by claims that he has been murdered at the behest of Tony Blair; then an MI6/GCHQ agent was found dead in his flat, which has sparked a new wave of speculation. Not all conspiracies are false of course: last week's investigation into the Claudy bombing revealed that the UK government had covered up a Catholic priest's involvement and new sources suggest the CIA tested the effects of LSD in Pont-Saint-Esprit. Next week, on the ninth anniversary of 9/11, there are dozens of events dedicated to proving that the attacks were an inside job.

Conspiracy theories are often dismissed as a harmless irritation. The idea that all is not as it seems, that a small cabal of powerful people control world events has always been with us. But in recent years they have become a widespread and influential cultural phenomenon. In some contexts, they may have serious social implications.

In The Power of Unreason, a Demos report released last Sunday, we looked at the role of conspiracy theories in extremist groups, violent ideologies and radical doctrine. We analysed more than 50 extremist groups from across the spectrum (far-right, left, religious, cult, anarchic), and found conspiracy theories to be at the heart of a lot of them. We argued they are a "radicalising multiplier", which, when combined with extremist ideology, can push groups and individuals in a more radical direction. Timothy McVeigh, the Angry Brigade, Combat 18, the Peoples Temple – were all fervent conspiracists. Not only that, these theories clearly harm trust in government, in particular counter-terrorism work, in ways not fully understood.

Therefore, something should be done about them. But this is the rub of course, because conspiracy theories are self-sealing. Any attempts, especially by government, risks "proving" the theory itself (if a government goes to the effort of rebutting them, surely there must be something in it). Instead, civil society must play a stronger role in engaging with conspiracy theories where they find them, and the education system needs to do more to equip young people with critical thinking skills, especially in respect of the net. More generally, security services can be more open in a number of, admittedly limited, areas such as reviewing the laws on disclosure of information, making counter-terrorism trial transcripts more widely available, and sharing more classified information with communities affected by counter-terrorism arrests. This can be done without jeopardising national or individuals' security.

This won't make conspiracy theories go away. Especially when, as the Claudy case shows, our government does routinely cover things up. The challenge facing us can be demonstrated by the immediate unleashing of baseless vitriol and bile at myself and co-author within minutes of the paper's release. We were accused by many 9/11 "truthers" (even though the paper was not about them) of being paid disinformation agents, or government patsies that are trying to indoctrinate children and cover up the truth of an emerging New World Order. Even the letter "o" in our logo is apparently proof of Demos' duplicity, because it looks rather like "an all seeing eye". This is all in spite of the fact that we called for greater openness and support critical thinking – something the truthers themselves claim to support too.

We certainly need healthy scepticism. But conspiracy theories are kneejerk, lazy cynicism. We need to limit their corrosive and destructive impact. The government lacks the credibility to do so. It falls on the rest of us to act.