In his first prison interview Viktor Bout, accused of being the world's biggest arms dealer, tells Nick Paton Walsh that he had no links to al-Qaida and should not be extradited to the United States 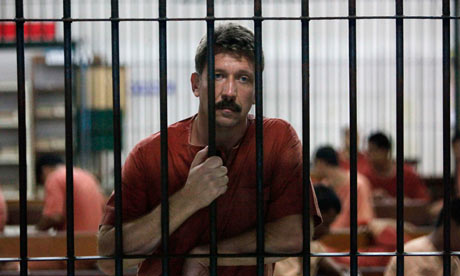 Viktor Bout in a holding cell in Bangkok last week. Photograph: Sukree Sukplang/Reuters
Viktor Bout, the Russian accused of being the world's biggest arms dealer, has angrily denied allegations that he supplied weapons to the Taliban and al-Qaida in his first interview for six years with the western media. Bout is currently languishing in a maximum security prison in Bangkok after being arrested in March last year in a sting operation by American agents. The United States has requested his extradition and final court hearings are expected to take place next week.

Bout said that the allegations against him were "lies and bullshit". He said: "I never supplied arms as such at all and I never especially never had any deal with al-Qaida." Asked if it was possible that planes owned by him carried weapons without his knowledge, he said: "I could not exclude that." During four separate interviews with Channel 4 News, he later admitted that his planes did ship arms into Afghanistan in 1996 for the government during the civil war it fought against the Taliban.

Bout, who has been nicknamed "the Merchant of Death" and "the embargo buster", became a notorious figure during the 1990s, when he was accused of illegally smuggling arms to numerous African regimes and conflicts.

The UN has accused him of arming the alleged war criminal Charles Taylor in Liberia, as well as rebels in Sierra Leone and the Congo. He was arrested in a five-star hotel last March while allegedly discussing the sale of shoulder-launched missiles with US agents masquerading as Colombian rebels from FARC. The request to Thai authorities to arrest Bout says the US feared he was travelling on a British passport, number K163077. UK officials have declined to comment.

His latest denials were treated with scepticism by those responsible for investigating his activities during the 1990s. Former foreign minister Peter Hain, who originally tagged him "the Merchant of Death", said: "He was fuelling the war in Sierra Leone, where terrorists with guns were cutting off the limbs of civilians and shooting the people of the country, and they would not have been able to do that if were it not for his arms coming in." Johan Peleman, who investigated him for the UN, said: "I would not – like some – call him the McDonald's of the arms business. I think he's more a very talented and cunning businessman."

In the orange shirt and shorts of a Thai prison uniform, Bout cuts a much slimmer figure than before. While happy to admit associating with warlords, he denies all accusations of wrongdoing.

Bout, 42, admitted he had worked for his "very close friend" Jean-Pierre Bemba, a warlord who became the vice-president of the Congo, who is now in the Hague awaiting trial for orchestrating rape, mass murder and child soldiering. Bout said: "I know Bemba very well and I am telling you from any point of view he would never give any orders, especially to rape women in the Central African Republic" – one of the crimes of which Bemba is accused.

Bout's supposed client list reads like a Who's Who of the world's nastiest warlords but also includes Americans, Britons, Frenchmen and Russians. A former US deputy defence secretary, Paul Wolfowitz, has admitted that planes connected to his department did fly supplies into Iraq to aid the US occupation. Bout said it was possible that these deliveries were made by a company run by his brother, Sergei. He denied earlier reports that he shipped armoured cars into Iraq for Britain. He said the French government did hire him to fly its troops into the Congo in 1994 for Operation Turquoise, a relief mission after the Rwanda genocide.

Some analysts suspect that Bout's activities were linked to Russian intelligence. He denies this, but, asked if he worked for the Russian state, he said: "Sometimes, yeah. We did the flights." His battle against extradition has now become intensely political. Some observers have speculated that he is of high value to the US because of his alleged links to Igor Sechin, a deputy to Russian prime minister Vladimir Putin and one of the Kremlin's most powerful figures. He denied any such links or ever meeting Sechin, saying that the two men did not – as is claimed – serve as intelligence officers in Mozambique at the same time. The last days of Bout's court hearings are on Tuesday and Wednesday and a decision is expected within a month.

Although one estimate had his wealth at $6 billion, Bout said he was bankrupt. He said: "I have my [principles], I did not do this just for money, otherwise I would be definitely way more richer and would not be in this position [in jail]. I did not move arms for the Taliban, I did not move arms for many other people." He added: "I would do the same [all over again]. These are the decisions of my heart and my mind. So what, what's wrong?"