Overnight I sent an old GlaxoSmithKline internal file to someone very special. Her reaction was one of complete shock, anger and, she tells me, was even moved to tears.

The file in question relates to GlaxoSmithKline's constant denials regarding Seroxat withdrawal... in as much that they deny there is a withdrawal problem. Withdrawal lawsuits have been settled out of court in the US but there is one pending here in the UK. Glaxo and their team of lawyers are, of course, disputing that patients have struggled and suffered tapering from their product, at least I think that is there stance? It's hard to believe that they can still deny their is a problem, particularly when this document still pops up every now and then on various advocate blogs and web sites.

I am, of course, referring to the 'Where's my Paxil' document. A document that quite clearly shows how GlaxoSmithKline [then SmithKline Beecham] were deeply worried about withdrawal problems with their new blockbuster drug.

It defies belief that a bunch of solicitors representing Glaxo could even have the audacity to argue that their 'client' has been forthcoming with the truth. Then again, everyone is entitled to legal representation even if it is blindingly obvious that they don't really stand much chance of winning - legal technicalities can always let them off the hook.

Personally, I strongly believe that huge corporate companies such as GlaxoSmithKline play the legal system well. They stall, they send items of discovery that are tantamount to looking for a needle in a haystack, in essence they grind those waiting for a form of closure into the ground and any offer out of court that is made will [normally] be taken by those who have been suffering. Debt ridden because they cannot find employment because the drug they took still causes them to cringe at sudden loud noises or causes them sleep problems or sudden outbursts of rage because their concentration levels are not what they used to be. There are more reactions suffered by people, some of whom are sadly still 'hooked' on Seroxat. Fortunately, I'm not anymore.

Briefly, it took me a total of 21 months to taper from Seroxat, a drug that the manufacturers claim can be tapered off within 2 weeks:

If ‘discontinuation reactions’ occur in patients stopping [Paxil], the majority will experience symptoms that are mild to moderate in intensity, and are usually limited to two weeks. - Mary Anne Rhyne - GlaxoSmithKline spokesperson 2005

Maybe there are people out there who can taper in under two weeks without suffering the severe side-effects Seroxat causes other people. It does not and should not take away the facts that are indisputable. There are many people who have suffered as a result of taking Seroxat and Glaxo and other pro- pill pushers should remember this.

It would appear that Glaxo were already aware of this problem many years ago.

A 1997 sales memo sent out to Glaxo [SKB] Reps highlights this particular problem.

It is so stunningly laid out in full glory. Glaxo [SKB] were worried that the withdrawal problems with Seroxat could seriously put a huge dent in sales that they felt the need to draw up a memo to their reps.

They must have, at some point, offered this new terminology to the drug regulator, those folks who are put in place to protect the public from harmful drugs [a pig just flew past my window]

The most sickening thing about this memo is the stab at humour the author/s have at the very end of its 2 pages.

Glaxo's [SKB's] sales reps are reminded, "Let's face it in the end the only thing the anxious and agitated patient will be saying is: 'Where's my Paxil!!!!!!'" This is followed by an illustration [cartoon] of a screaming woman.

Now, why would a patient be anxious and agitated, more importantly, why would they be saying 'Where's my Paxil'?

The same withdrawal that for years GlaxoSmithKline have denied, Yet this 1997 memo shows quite clearly that they knew. If they knew then you can second guess that the likes of the FDA and MHRA knew too.

Now, back in 2008, I met with Kent Woods v[KW], CEO of the Medicines and Healthcare products Regulatory Agency. My gripe was withdrawal and the facts that people [patients] were needlessly suffering. This, some 11 years after this 1997 memo was authored.

The notes of that meeting can be found HERE but I would like to draw your attention to these few lines.

During withdrawal he [Bob Fiddaman] experienced severe “zaps” in his brain. He described his dependence on the drug [Seroxat] as an addiction, and exemplified that by relating his feelings of wanting to “rip the shop apart” if it turned out that they were out of stock.

KW noted that the term “addiction” ought to be reserved for circumstances which typically entailed cravings leading to increase in dosage, but suggested it was less important to argue about terminology than to acknowledge, as he did, that there are significant problems associated with withdrawal; the issue was how best to manage withdrawal. He noted that, as with benzodiazepines, those SSRIs which both act and disappear more quickly are more likely to pose problems with withdrawal. He did not know whether a switch to slower acting SSRIs had been researched as a potential solution, as it had proved to be for benzodiazepines.

What I find odd about this section is the lack of acknowledgement by the MHRA's CEO. Semantics are used by politicians when they don't want to answer a direct question.

With this in mind, today I was browsing the MHRA's database. I came across a document entitled, 'MEETING OF THE COMMITTEE ON SAFETY OF MEDICINES, HELD ON THURSDAY 26 MARCH 1998'

In black and white there was that term again, 'Discontinuation'.

Not quite a 'discontinuation syndrome' but it's pretty easy to see why Lilly wanted the change - just as Glaxo [SKB] did in their 1997 memo to sales reps.

Astonishingly, the Committee were asked whether they thought that a change in terminology from withdrawal reactions to 'discontinuation reactions' would be appropriate as suggested by Lilly. It was agreed that it would be inappropriate to change medical terminology in this way.

"Withdrawal syndrome" was clearly defined as "a class effect that can occur when an SSRI is stopped abruptly.

Skip to the 1998 Committee on Safety of Medicines Meeting:

Singing from the same hymn sheet?

In the red corner - SmithKline Beecham:

In the blue corner - Eli Lilly:

I have written about Breckenridge before. I don't know the man personally but judging by his performance on BBC TV's Panorama, I strongly suspect that he will, in future, be kept away from the media because his ignorance over Seroxat is quite shocking.

Here's a classic quote from Breckenridge. It's taken from The New Statesman in [2005].

“If you go back – and I read this out to the Health Select Committee – to the data sheet on Seroxat when it was licensed in 1991, we spelt out word for word the problems of withdrawal from Seroxat, in words that we could not improve now. This idea that the regulators have been hiding the data is just not true. The so-called scandal of Seroxat is something I want to nail every time I speak in front of compatriots because it is absolute rubbish”.

His performance in front of the camera's was less than convincing. This edited version also features GlaxoSmithKline's Alistair Benbow defending Seroxat.

It's a cringing performance from Breckenridge, cringing for those at the MHRA at least. Red face, stuttering, long silences whilst staring into space whilst being grilled by BBC TV's Shelley Jofre.

So, with a regulator that, it appears, sing from the same hymn sheet as the pharmaceutical companies, its hardly surprising that they would also like to play down the withdrawal effects of Seroxat. 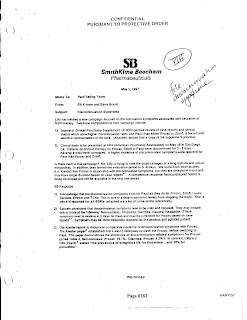 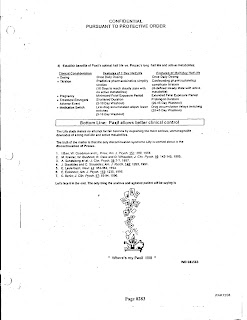 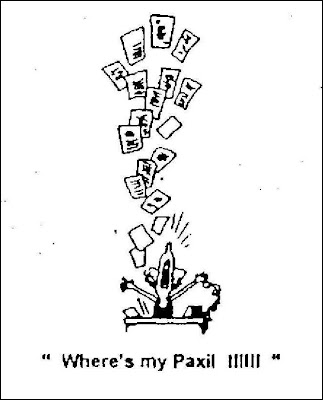 The PIL in 1996, approx one year prior to the memo that was sent to SmithKline reps, makes no mention of the word 'withdrawal.'

GlaxoSmithKline are currently the subject of litigation in the UK regarding their antidepressant drug, Seroxat.

The claim is being pursued by several hundred U.K. patients who said it was difficult to stop taking the antidepressant Seroxat [known as Paxil in the US].

Glaxo have stated, "We believe there is no merit in this litigation."

Read the new book, The Evidence, However, Is Clear...The Seroxat Scandal

PROMOTIONAL VIDEO HERE
You might also like:
SEVERING TIES WITH THE MHRA
MY REPLY TO MHRA CEO, KENT WOODS
Paroxetine - The Teratogenic Effect by Bob Fiddaman
LinkWithin