[It beggars belief that this germ brew was cut into babies and adults, and claimed to have saved us all from smallpox!  It is no wonder it was termed the slaughter of innocents by William Job Collins.

Take pus from a cow which contains animal germs such as TB & Brucellosis (one animal virus, SV40, from the polio vaccine is causing cancer now), or pus from a smallpox victim (75% of vaccination was arm to arm as late as 1890) which could contain leprosy (introduced into Hawaii by vaccination), Erysipelas, Smallpox, Syphilis, TB/consumption etc, plus any bacteria growing in the pus which would easily lead to death from poisoning (these are some of the contaminants contained in today's vaccines.) No methods of sterilisation were available, they thought glycerine killed all germs!  Cut the victim with a knife called a lancet and place this pus in the wound.  Hundreds of people could use the same lancet and ivory points--NB: The WHO say 1.5 million people died in 2001 due to dirty needles, and they eliminate unhealthy kids from vaccine trials, which would have been the norm in the 19 century, especially with their Diet.  You can see as late as 1925 the vaccine genocide continuing in the Philippines.  And this is how the Medical Mafia saved the world from smallpox!!]

"Lymph is a false term. It is diseased and disease-bearing matter, and should be called pus, and its wilful insertion into the skin of any human being should be called blood-poisoning, and denounced as a crime of the first magnitude."   Wallace, LL.D. (1889/1898, Alfred R (source: LEICESTER: SANITATION versus VACCINATION BY J.T. BIGGS J.P.)

"You cannot immunize sick children, malnourished children, and expect to get away with it. You'll kill far more children than would have died from natural infection ......So Jenner got some of the 'cowpox' and inoculated it into someone's arm - it fostered and the pus was then inoculated into someone else - 100% success was claimed. 100%!! How absurd - complete with all sorts of germs including hepatitis, syphilis and whatever. If one did that today, without antibiotics, the death rate would be huge."---Dr Kalokerinos, M.D. 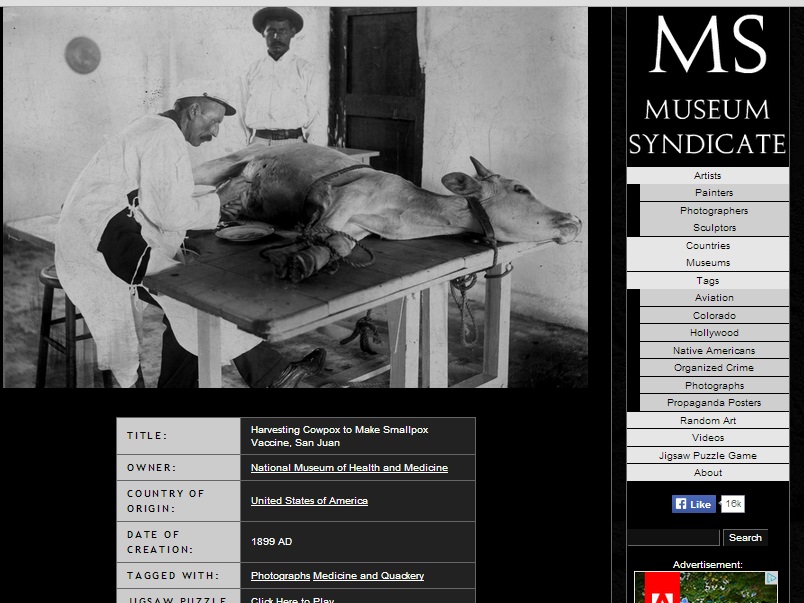 The Connaught archives hold a fourth photograph that does not appear in the collage, although it appears to have been taken at the same time as the three in the magazine. It shows a calf splayed on the operating table, legs encased in white cotton, with a technician scraping the vesicles, with a glass topped laboratory table next to him. The technician is white coated, but dark smears of what appears to be blood can be seen on his pants. This was not, perhaps, an image likely to reassure parents or anti vivisectionists. http://niche-canada.org/2015/04/13/animal-matter-the-making-of-pure-bovine-vaccine-at-the-connaught-laboratories-and-farm-at-the-turn-of-the-century/   http://activehistory.ca/2015/04/animal-matter-the-making-of-pure-bovine-vaccine-at-the-connaught-laboratories-and-farm-at-the-turn-of-the-century/

Bovine smallpox vaccine was lymph taken from the pustules of cows infected with cowpox. Vaccination had earlier involved the transfer of fluid from one human arm to another, which created its own set of problems, and the use of the calf in the late nineteenth century was seen as an improvement. (A calf could not transmit syphilis, or a range of other human diseases as human lymph might.) To produce bovine vaccine, the calf was shaved and scarified with vaccine; five days later large vesicles formed, and when the vesicles were considered ripe they were broken and the lymph harvested. It was this material that was used to vaccinate children against smallpox. http://activehistory.ca/2015/04/animal-matter-the-making-of-pure-bovine-vaccine-at-the-connaught-laboratories-and-farm-at-the-turn-of-the-century/

English physician S. Monkton Copeman showed that adding glycerin to lymph acts as a germicide. As glycerin came to be widely used, it reduced transmission of harmful microbes via the lymph. This photograph from a brochure shows the cattle operating room at Dr. H.M. Alexander's vaccine farm, outside Philadelphia. http://www.historyofvaccines.org/content/vaccine-production