(aka H5N1)
[back] The Diseases  Viral fear racket

[Just another attempt in taxpayer extortion with vaccines and pharma anti-virals, plus the Fearmongering--they have to keep the population in fear so they clamour to be saved by pharma med,  and government, while giving away more freedoms  to usher in the overt Fascist state, from our present covert one.  These are the very same villains who brought us Spanish Flu (from vaccines), AIDS in vaccines, SARS, Foot and Mouth holocaust , Anthrax vaccine (Gulf War Syndrome).  Go figure---doesn't exactly want to make you run out and have the Bird Flu jab.  And to top that it doesn't say much for their medication (holding for a nanosecond the fantasy that they didn't create this), when they say it will kill millions, but their pharma anti-virals have always been useless. If you think they are out to help us with vaccines and pharma anti-virals then ask yourself why they have suppressed vitamin C which will deal with all viruses.  And get a Croft zapper which will also.]

Articles
[2006] BIRD-FLU UPDATE BECAUSE IT'S TIME by John Rappoport

Bird Flu or Cash Cow? The Pandemic Some Want To Have By Eve Hillary

"There are two viruses going around at the moment; one is avian flu and the other is the fear of avian flu."--Patrick Holden, of the Soil Association

Book
FOWL! BIRD FLU: It's Not What You Think by Sheri Tenpenny

Quotes
"AIDS and SARS are ways for epidemiologists (e.g., the CDC, WHO, etc.) to secure their jobs and continued funding for their agencies.  No new emerging epidemics, maybe no CDC, no WHO, so we've got an infrastructure that REQUIRES the "discovery" of new, threatening epidemics.   And the media pick a new one every year.  This year, it's SARS.  For the past couple of years, it's been West Nile Virus.  Next year it'll be something else."---- Dr Dan Duffy DC

We are experiencing in the present bird flu panic that the state, contrary to its knowledge, in Germany is surrendering the population into the hands of some persons or other who are camouflaging themselves as scientists. An enforced chemotherapy is being planned, and next spring the entire German population is to be forcibly vaccinated twice against the purported bird flu phantom.
But neither has ever a bird flu virus been demonstrated to exist, nor has the existence of any virus whatsoever that would have anything to do with anybody's falling ill been demonstrated. Such viruses do not exist. Precisely in the same manner as the minister admitted, concerning the purported AIDS virus, they are being maintained to be proven and therefore to exist because of an international scientific consensus..................[27.10.2005] Interview with Stefan Lanka  on "bird flu" and some related subjects

[2009 April] Pandemic of panic - After salmonella, bird flu, the Millennium Bug... should we actually be scared this time?   It is not long since, in 2005, an even more senior WHO official was telling us that, any time soon, a worldwide epidemic of Asian bird flu could kill '150 million people'. The actual death toll from bird flu to date is around 200, barely double the number already dead when that hysteria was at its height.

The name of that English laboratory the public has not gotten to know. It's the reference laboratory of the EU for bird flu, in Weybridge. I have asked the scientists several times for the pieces of proof of the existence of the H5N1 virus. They have replied to me only once, and after that never again, and wrote that they did not understand my question.
To the World Health Organization and in particular to the bird flu pandemic co-ordinator, the German Klaus Stöhr, I also have written several times and asked for proof of the existence of the bird flu virus. Neither the WHO nor Klaus Stöhr has reacted to this. ...............
For demonstrating the existence of H5N1, really no sample is necessary either, since, as is the case with all purported contagious diseases, it is a question of a planned action, intended for political reasons to induce fear.
Firstly, those round formations which supposedly are influenza viruses are, as every molecular-biologist can see,  artificially  produced  particles consisting of fats and proteins. The layman can check on this by asking for a scientific publication in which these pictures are reproduced and described and the composition of the formations shown is documented. Such a publication does not exist.
Secondly, those pictures which supposedly show bird flu viruses in reality show, as every biologist can make out without any doubt about it, quite normal component parts of cells, or even show complete cells which happen to be in the process of exporting or importing cell and metabolism component parts. Again, the layman can check on this very precisely, by asking for those publications on which those photos are based and from which they originate: He will never receive such publications. The scaremongerers' craftguild is loth to expose its trade basis, the swindles with laboratory and animal experiments.
If you ask the picture agencies or a news agency such as the dpa from where they are getting these photos of theirs, then they will refer you to the American contagious-disease authority the CDC of the Pentagon. From this CDC it is that the only photo of the purported H5N1 originates too. 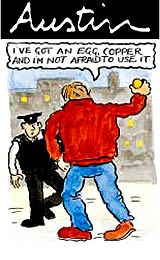 This photo shows the length section cut and also the cross section cut of tubes in cells which have been caused to die in a test-tube. These small tubes in the professional language are called microtubuli, and serve the transport and communication in the cell and in the process of cell division. [27.10.2005] Interview with Stefan Lanka  on "bird flu" and some related subjects